The Star: Ice education breaks through 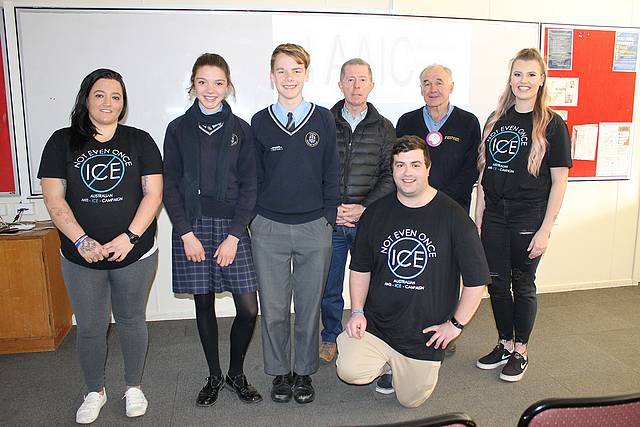 THE Australian Anti Ice Campaign (AAIC) presented its first Victorian workshop at the Chairo Christian School last Thursday, to students in years 7 to 10.

The workshop was funded by the Leongatha and District Community Foundation and chair Rob Bacon said it was important topic for young people.

“We were hoping all the secondary schools in the town would run the program,” he said.

So far, Chairo was the only school to take on the program, however Mr Bacon said another was keen to hold a workshop in term three.

The workshop was delivered by people who have successfully rehabilitated from an ice addiction.

The presenters graphically conveyed the harsh reality of ice addiction and were uniquely positioned to break through peer influence with total honesty from personal experience.

Presenter Rhiannon Ross said when she was at the height of her addiction, she was smoking around $800 of ice a day.

“Ice doesn’t discriminate. I lost my car, my friends and my family, both most importantly, I lost myself,” she said.

“It is one of the most addictive substances known to man.”

“It was a pretty full on topic,” he said.

“The presenters, two former ice addicts, talked about what ice is, what it looks like, what having an ice addiction is like, its toxic ingredients and the serious consequences that come with taking the drug.

“At the end, they had the students say all together ‘not even once’.”

Mr Collier said he took a risk by hosting the workshop, which was the first presentation by AAIC given in a Victorian school.

“I had to weigh up whether it would be too confronting for students or too controversial, against the possibility of our students not being equipped to make informed decisions,” he said.

“The reality is, children are going to make these choices at a younger and younger age, and I wanted them to be informed.”

Mr Collier said the workshop was attended by all 55 of the school’s secondary students.

“I don’t think any of them will touch the stuff after today,” he said.

“I will be emailing the other Leongatha principals to encourage them to hold a workshop with AAIC.”