In todays episode we talk to CEO of the Room Xchange and how they are helping Australia's bushfire victims - also their services across the world. A discussion with wonderful writer Rhonda Valentine Dixon about her writing journey. Kerry Hort Rowe with her programs for youth and young women across Australia. Our final guest today is Andre's Simmons from the Australian Anti Ice Campaign. All about the drug ICE, how her organisation helps, what you can do to help and the NOT EVEN ONCE campaign.

Dozens of Cairns locals sacrificed their Sunday sleep in, for our city's first Walk Against Ice.

The community event raising awareness of the despicably addictive and destructive drug, which affects on average one in every 70 Australians.

Today Tonight: The Perth father and daughter, teaming up in the war against meth.

Coffs Coast Advocate: ‘I lost everything’

Reformed ice addict’s warning to youth
3rd September 2019. A former finance worker has revealed the devastating details of his spiral into addiction and hopes it will encourage youth to avoid the drug. 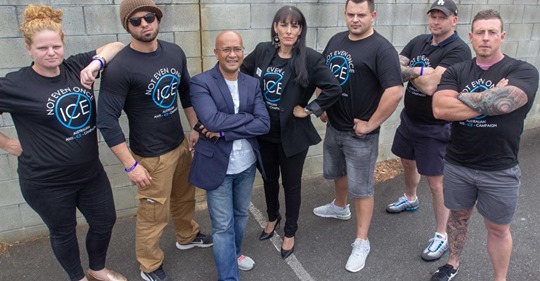 The Community Ice Action Team, made up of Jose and five other reformed addicts, has been launched on the Coffs Coast. CEO of the Australian Anti-Ice Campaign Andre’a Simmons visited Coffs Harbour for the launch. Photo: Kyle Hands Media

AFTER 13-years of ice addiction Jose Porcia had lost everything.

He had become homeless between stints in jail, committing petty crimes to support his addiction - a long fall from grace for the university-educated former finance worker.

Jose said it was back in 2003 when he had a thriving career in Sydney that a friend had first offered him the drug.

The selling point was that is was the drug for "successful people", something the friend claimed would boost the then 33-year-old's creativity and performance at work.

But his spiral into addiction was quick, and within two weeks Jose said he was chasing down a dealer.

"My career was taken away from me because I tried the drug once. All my education and everything I had learned didn't matter anymore," Jose said.

"It took everything away from me one by one, including my family.

Last week the head of AAIC Andrea Simmons along with our Care Team Coordinator Leeanne Butcher went to Coffs Harbour to train a new set of presenters that will engage with schools, prisons and the community on the North Coast of NSW.

These presenters are all former ICE addicts with lived in experience and know all about the true dangers and consequences of trying ICE even once. Over the course of the week they were trained in Dual Diagnosis and AAICs evidence-based practice presentation. Next they will be partnered with a more senior presenter to ensure they are fully trained and prepared to bring awareness and education to the community about the dangers of ICE.

It is the hope of both AAIC and the presenters that others do not succumb to dangers of ICE and experience the same torment that they have been through and the effects it has on themselves and those around them. We hope that with this new addition of presenters to the North Coast we will be able to have an impact within the community in reducing/eliminating the usage of ICE and helping those who are currently recovering or still suffering from addiction by providing support and awareness. 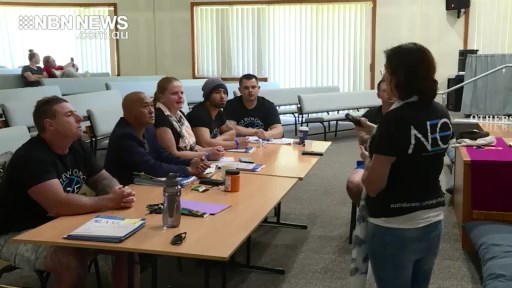 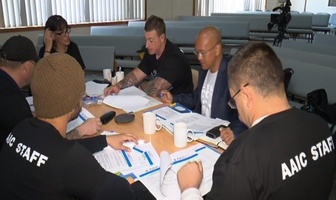 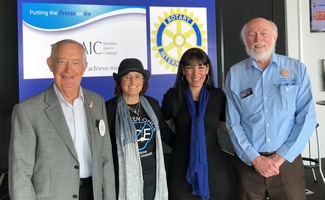 Picture this: a young, vivacious, successful woman, with a successful business, a loving family. Andrea Simmons outlined in vivid detail how she was partaking in a bit of a knees-up at a swank hotel in town. Lots of good company, banter, laughter. Somebody suggests to her “take a puff of this, it isn’t going to hurt you…” and – literally – her world of success and love goes up in the proverbial puff of smoke.  A rapid descent into addiction, psychosis and other major health issues, her wealth destroyed. “I spent as much as $500 a day” she explained, “and I didn’t know any way I could get out”.
That is just one case. Do you know that every day, on average some 27 young people become addicted to “Ice” (Crystal Methamphetamines)? Do you know the method on how to make Ice is in plain sight on the Internet?” Only some 2% come out at the other side; if successful, the withdrawal period is an excruciating 18 months. The Australian market is totally flooded with the stuff: wastewater sampling tests show an increase of as much as 480% in the six years to 2016 and it has gone worse since then. Do you know that kids as young as 12 years old are given “free samples” and then, when they inevitably become addicted, are offered a “franchise distribution”? Do you know that availability is easy? Andrea outlined an instance where, when visiting the Gold Coast, she obtained a “pipe” with great ease, just asking for it.

Former ice addict to be inspiration to others affected by drugs

Listen to Murray Jones' interview with Esther, one of our amazing presenters, about her journey into ice addiction and back again. Esther is the mother of two young children and has now turned her life around to a point where she is working with the Australian Anti Ice Campaign.

ANTI-ICE: The Australian Anti-Ice Campaign has expanded to Cairns, in a bid to crack down on the pervasive drug.

Campaigners will join local police and community members for a public awareness event, as they work to eliminate this devastating substance from our streets.

A new Walk Against Ice event will be held in Cairns as part of the Australian Anti Ice Campaign’s launch into Far North Queensland.

The Combined Rotary Clubs of Cairns and the Cairns Chamber of Commerce have partnered with AAIC for the event.

The Rotary Clubs have also provided direct financial sponsorships towards the cost of AAIC’s High School Anti Ice Education Workshops, which are scheduled to re-commence in Far North Queensland high schools this week.

The workshop presenters are all people like AAIC founder and chief executive officer Andre’a Simmons, who have recovered from methamphetamine (‘ice) addiction.

The Combined Rotary Clubs of Cairns and the Cairns Chamber of Commerce have partnered with the Australian Anti Ice Campaign (AAIC) to stage an annual Walk against Ice event in Cairns as part of AAIC’s launch into Far North Queensland.